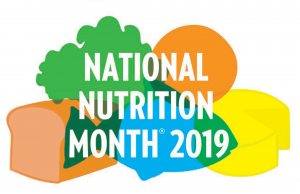 Suwanee, GA/March 12, 2019 – The Nutritional Addiction Mitigation Eating and Drinking (NAMED) urges all Americans to take part in National Nutrition Month® activities during the month of March. National Nutrition Month® is an annual nutrition education and information campaign created by the Academy of Nutrition and Dietetics. The campaign, celebrated each year during the month of March, focuses attention on the importance of making informed food choices and developing sound eating and physical activity habits. Developed by Dr. Keith Kantor, NAMED develops a precise nutritional menu and very specific hydration for those undergoing substance abuse recovery, mental illness and now for almost any illness or disease.

“I am very pleased that NAMED is taking part in National Nutrition Month®,” said Dr. Keith Kantor. “Informed and healthy food decisions along with exercise are critical not only one month a year but for everyday to achieve a lifetime of good physical and mental health. At NAMED we believe a nutritional food menu along with hydration and exercise are critical in treating mental illness, substance abuse, and other illnesses.”

The NAMED program is the only one in the world that concentrates on not stimulating the opiate receptors or even suppressing them naturally through specially designed menus. This lowers the cravings for the abused drug, increases the success rate and lowers the relapse rate. The program also lowers the inflammation in our bodies, which causes the insulin production mechanism in our bodies to malfunction. In addition to substance abuse. NAMED uses the same concept(specially designed menus and specific hydration) to mitigate Mental Illnesses. Also, Dr. Kantor is in charge of the Nutrition Program for www.vetcv.com, helping veterans to mitigate almost any disease/illness including substance abuse and mental illness with precise nutrition and specific hydration. NAMED Program also helps the general public mitigate almost any disease/illness with precise nutrition, specific hydration and healthy lifestyle additions.

Additional information on the NAMED. program may be obtained at www.namedprogram.com.