Taking a Closer Look at the Neglected “Pineal Gland” for Optimal Mental Health! 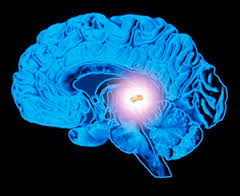 What is the Pineal Gland?

The Pineal Gland is an endocrine gland sitting alone in the brain level with our eyes. The Pineal Gland is sometimes called the master gland since it is so important in our endocrine system. The Pineal Gland is also known as the pineal body, conarium or epiphysis cerebri. It is the shape of a pine cone, hence its name (1). The pineal gland is located in the epithalamus, near the center of the brain, between the two hemispheres, tucked in a groove where the two halves of the thalamus join. The pineal gland is the only midline brain structure that is unpaired(azygous). The gland is a reddish-gray and about the size of a grain of rice (5-8 mm). Unlike most of the human brain, the pineal brain is not isolated from the body by the blood-brain barrier system (2); it has profuse blood flow (3), second only to the kidney, supplied by the choroidal branches of the posterior cerebral artery.

The pineal gland consists mainly of pinealocytes but four other cell types have been identified. They are Interstitial cells, perivascular phagocyte, pineal neurons and peptidergic neuron-like cells.

What are its functions?

The pineal gland is involved in several functions of the body including:

What affect does substance abuse have on the Pineal Gland?

With the pineal gland controlling melatonin production and affecting serotonin and sleep, (5) It is easy to see how it affects certain substances abuse problems.

So how does the Pineal Gland get blocked?

In some parts of the brain and in particular the pineal gland, there are calcium structures. The number of calcium structures which increases with age. These are called corpora arenaceal (or “acervuli,” or “brain sand”). Chemical analysis shows that they are composed of calcium phosphate, calcium carbonate, magnesium phosphate, and ammonium phosphate. (7) In 2002, deposits of the calcite form of calcium carbonate were described. (8) Calcium and phosphorus (9) deposits in the pineal gland have been linked with aging, Alzheimer’s, dementia, (10) and many other mental illnesses.

The mechanism of toxicity involves the combination of the fluoride anion with the calcium ions in the blood to form insoluble calcium fluoride, resulting in hypocalcemia; calcium is indispensable for the function of the nervous system, and the condition can be fatal. Treatment may involve oral administration of dilute calcium hydroxide or calcium chloride to prevent further absorption. (17)

Fluoride from water in our drinking water, food, and showers, enters our bloodstream and has a half-life of over 20 years, causing massive brain damage to unborn fetuses and gradually impairs IQ, as well as depressing cell growth rate (16). Most of the fluoride accumulates in the pineal gland which is the 2nd highest organ which receives blood-flow in the body.

In summary, of the critical factors affecting the pineal gland are: Poor diet, exposure to toxins in the environment (fluoride, EMF), (13) stress and modern life. The pineal gland hardens over time, then calcifies and eventually shuts down. (12)

This “master gland is reduced in function hardened by electromagnetic fields (EMF) (13). This is wireless technology, cell phone towers, cell phones, “smart” meters and appliances to name a few.

The pineal gland is especially sensitive to fluoride (11) (13) (14) which is in our water, many foods, tooth pastes and mouth washes. Likewise, foods laden with pesticides, preservatives and chemicals causes the pineal gland to become sluggish and lose its vitality and power.

Other foods like sugar, simple carbohydrates, gluten, dairy, nicotine, caffeine and foods containing or made with GMO’s have all been shown through various clinical tests to have negative effects.

Calcium supplements are thought to be harmful and it is better to gain the needed calcium through our diet and calcium rich foods such as almonds, leafy green vegetables and tahini.

By helping detoxify the pineal gland we can do a lot to help with the mental diseases, Anxiety, Alzheimer’s/Dementia, PTSD, Depression, Bipolar Disorder, ADHD and many other mental illnesses. Not only mental illnesses but also other chronic diseases of which many are adversely affected by Inflammation. Promoting detoxification to refurbish this “master gland”, called the pineal gland, will help our overall health specifically neurological health.

It is important to detoxify the body in order to decalcify the pineal gland. Our poor diets and contemporary fast paced lifestyle are the main causes of calcification of the pineal gland. Consuming calcium hydroxide rich water regularly will give numerous benefits.

The foundation of the lifestyle changes made, is water. Drinking a calcium hydroxide rich water is highly recommended to start flushing out toxins.

Hydroxide water(OH-) is usually used to help eliminate acidity (H+), which reduces acidosis, which causes inflammation. In this case, studies show the hydroxide ions that are not used to combine with H+, may combine with calcium forming calcium hydroxide, since hydroxide can pass through the blood-brain barrier, some of the calcium removed should be from the pineal gland, thus aiding in decalcification. This can affect the entire brain. The advantage the pineal gland has as mentioned earlier, it is one of the few brain structures that is NOT in the BBB. Meaning, an easier route of de-calcification. (2) In addition, the pineal gland is the second highest blood flow rate in the human body.

Detoxification is a two-part program; first to make sure no further calcification takes place and second, reversing the calcification that has already taken place. This can be done through nutrition and lifestyle behavior modifications.

Apple cider vinegar has been shown to promote an alkaline body chemistry reducing inflammation when combined with other healthy behavior modifications.

Iodine rich foods include seaweed, kelp, cranberries, green beans, kale, dark leafy greens, bananas, shrimp, and lobster. Iodine supports optimal thyroid and pineal gland function while promoting the removal of fluoride from the body. Iodine can be harmful in high doses, consider a water-soluble supplement if at all to avoid toxic levels.

Raw, organic chocolate is rich in antioxidants that fight free radicals and keep our brain healthy, promoting detoxification of the pineal gland. Not all chocolate is equal- 70% Cacao or more is the type of chocolate to promote benefits.

Coconut oil nourishes the brain and detoxifies the pineal gland. It is rich in medium-chain triglycerides, which are converted to ketones in the liver. Ketones in this capacity have been shown to restore neurons and nerve function in the brain. Coconut oil has been researched for Alzheimer’s disease benefits, reducing symptoms and progression.

The minerals and antioxidants from this group of vegetables and herbs help detoxify and energize the pineal gland while nourishing the brain. Specific examples include: sprouts, parsley, cabbage, broccoli, and brussel sprouts.

Light reflected by the retina stimulates and energizes the pineal gland. Specifically, 20 minutes of indirect sunlight is recommended daily.

The health of the pineal gland is often overlooked in treating chronic disease specifically related to mental health, and Alzheimer’s disease. Making several small behavior modifications to nourish the brain and detoxify the pineal gland can improve overall health and well being long term.

(5)Jump up ^ Arendt J, Skene DJ (2005). “Melatonin as a chronobiotic”. Sleep Med Rev. 9 (1): 25–39. doi:10.1016/j.smrv.2004.05.002. PMID 15649736. Exogenous melatonin has acute sleepiness-inducing and temperature-lowering effects during ‘biological daytime’, and when suitably timed (it is most effective around dusk and dawn) it will shift the phase of the human circadian clock (sleep, endogenous melatonin, core body temperature, cortisol) to earlier (advance phase shift) or later (delay phase shift) times.