Diet or Eating Disorder? Where is the line? 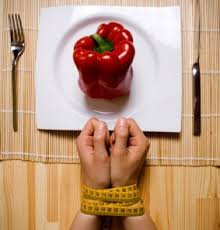 “She Knows Blog” asks Dr. Kantor about strict diets that could turn into an eating disorders.

turning into an eating disorder?

Eliminating anything from one’s diet including fat, carbohydrates or going vegetarian or vegan can be signs that a strict diet is turning into an eating disorder. Early signs of eating disorders in young girls include wanting to eliminate meat, in theory meat makes them feel heavier so they decide to do without. Other signs of an eating disorder are when a person passes up on social events or their favorite meals because they do not want to break their diet rules, meticulously count calories and nutrients, they have gone through a traumatic life event at which they felt like they lost control and they are using their ability to control their food intake to fill that void. Another sign of an eating disorder is binge eating, when they do break their diet “rules” they cannot stop eating and gorge on an enormous amount of calories and junk foods.

What is the difference between having an “eating disorder” and

The most common eating disorders include:

Bulimia is defined as: an emotional disorder involving distortion of body image and an obsessive desire to lose weight, in which bouts of extreme overeating are followed by depression and self-induced vomiting, purging, or fasting.

Anorexia is defined as: an emotional disorder characterized by an obsessive desire to lose weight by refusing to eat.

It is safe to say that most people have some disordered eating tendencies, but if they are able to not obsess about their food intake, lead a normal life, maintain a normal weight and activity level, then it would not need to be treated as an “eating disorder.” Eating a chocolate chip cookie when you were not truly hungry and feeling a little guilty is normal. Eating a chocolate chip cookie and obsessing about it until you purge it up or eating 10 more cookies because you feel like you are on a slippery slope is an “eating disorder” that should involve a team of health professionals to aid in recovery.

How has our focus on healthy eating (especially on Instagram and

Facebook) contributed to eating disorders? Could they be eating

disorders in disguise? Yes, and no. There is a lot of information out there and not much knowledge. “Following” qualified and credible health professionals is great for motivation, education, and inspiration including recipes, meal guides, lifestyle tips and workouts.   Following a self proclaimed guru, model, or celebrity that has little nutritional or fitness knowledge, along with multiple cosmetic surgeries and photo shopped photos, creating unrealistic expectations to lure vulnerable customers into buying products, is without a doubt contributing to eating disorders, among other emotional disorders, like depression.