Do you get nosebleeds? 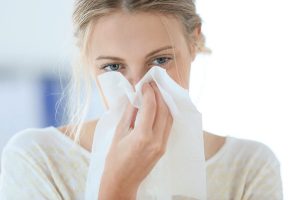 A nosebleed is common but it should not be written off either. A nosebleed is defined as an attack of bleeding from the nose and the medical term is “epistaxes.”

Less common causes of nosebleeds, which are also nosebleed risk factors, include:

What are some natural ways to stop nosebleeds?

Keep breathing and try not to panic. Sudden bleeding can be very alarming to any person of any age. If you’re experiencing a nosebleed personally, remain calm and remind yourself that most of the time a nosebleed is not serious and it will likely stop very soon. If you’re with someone who is experiencing a nosebleed, the very first and best thing you can do for that person is make sure he or she stays calm. Getting worked up about a nosebleed can actually make the bleeding even worse, due to a surge in adrenaline and heart beat increasing.

Both conventional and natural remedies will recommend cold compress. To help constrict the tiny blood vessels in your nose that are bleeding, you can hold a cold compress against your nose for a few minutes. The coldness of the compress will encourage the nose’s interior blood vessels to narrow, which should help to stop the bleeding. It can also help to apply an ice pack to the back of your neck briefly, to avoid fainting or the stress hormone response.

When people are trying to guess at how to stop a nosebleed, one of the first answers is usually to just stuff the nostrils with something. It’s perfectly fine and expected that you use a tissue, paper towel or cloth to wipe the blood coming out of your nose. Avoid packing the nose because according to experts, packing the nostrils with tissue or cotton can remove the top layer of the nose lining, making it bleed even more easily and for longer.

When you’re suddenly experiencing a common nosebleed, you should sit down, but don’t lie down. While sitting, lean forward slightly to help keep the blood from going down your throat. I know it’s not pleasant having it come out of your nose, but that’s preferable to having it go down your throat, which can end up bothering your stomach.

Now that you’re sitting and leaning forward slightly, squeeze the soft middle area of your nose using your index finger and thumb to close your nostrils. Continue to pinch this area for no less than five minutes, ideally ten to fifteen. If you release and blood is still coming out, repeat. Remember to breathe calmly through an open mouth while pinching your nostrils shut.

Even small things like a nosebleed can point to major health concerns like a tumor or uncontrolled blood pressure. Always tell your doctor about your nosebleeds and follow a healthy lifestyle plan of staying active, practicing stress relief, and consuming a diet rich in certified all natural protein, vegetables, heart healthy fats and unprocessed grains.