Life with Gracie: Why heroin and why now? AJC

The first thing you need to know about Troy Roundy and Joe DiFabio is they grew up in stable middle-class families in two of Atlanta’s wealthiest suburbs.

They were smart kids with movie star looks and promising futures.

But like an ever increasing number of whites, both fell prey to heroin addictions. Troy after undergoing surgery on his back. Joe after an older friend shared his stash.

“I fell in love with it from the very start,” DiFabio said. “It was the one thing in my life I had complete faith in. It would always be there to work for me. If the girlfriend broke up with me. If I got an F on a test. If I got hurt playing hockey. Heroin would make everything better.”

Only it didn’t. Heroin nearly destroyed them both because that’s what heroin does. The numbers bear this out. 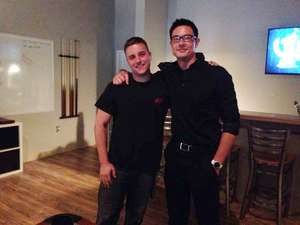 Joe DiFabio, left, and Troy Roundy, former heroin addicts, hang out at The Legacy Club in Johns Creek. The club is part of the treatment program offered by DecisionPoint, an outpatient program for people struggling with drug and alcohol addiction. GRACIEBONDSSTAPLES/gstaples@ajc.com
Heroin-related deaths nearly doubled across the country between 2011 and 2013, according to the Centers for Disease Control and Prevention. More than 8,200 people nationwide died in 2013 alone.

Roundy, 33, and DiFabio, 26, could have very easily been counted among them, but about a year ago they met Mike Reis, author of “Recovery of a Lifetime,” and founder and CEO of DecisionPoint, an outpatient program for people struggling with drug and alcohol addiction in Johns Creek.

Prior to the 1980s, whites and non-whites were equally represented among first-time heroin users. Now, nearly 90 percent of those who tried heroin for the first time in the past decade were white. And a growing number are middle-class or wealthy like Roundy and DiFabio.

Each week, Gracie Bonds Staples will bring you a perspective on life in the Atlanta area. Life with Gracie runs online Tuesday, Thursday and alternating Fridays.

So why heroin and why now?

A good many heroin addicts — some 75 percent — started down that deadly road after becoming addicted to prescription opioids such as OxyContin because heroin was cheaper and easier to get.

But the truth is, Reis says, heroin addiction has been with us for a good long while and at a cost higher than anyone imagined.

DiFabio, left, and Roundy, enjoy a round of pool at The Legacy Club.

“It’s everywhere,” he said. “Most people don’t want to acknowledge it because of the stigma attached to it, but we’ve got a war on our hands.”

The nation’s long-running war against drugs used to be defined by the crack epidemic and based in poor, predominately black neighborhoods.

The public response at that time, you may recall, was defined by stiff prison sentences, zero tolerance and the “Just say no” campaign.

We’re having a much broader conversation about prevention and treatment, and the response has been considerably more compassionate.

I wish it had come sooner, before entire black communities were destroyed, but better late than never.

DiFabio told me he spent eight years chasing his first high and six of those desperately trying to avoid the side effects of going without. If he didn’t use, his days were spent in agony — vomiting, shaking, sleepless. Only one thing could make it all go away and that was more heroin.

“It’s a trap, a complete trap,” he said. “It’s freeing, but soon afterwards it’s like food and water. You need it to survive.”

In 2015, after overdosing eight times in six weeks, DiFabio met Roundy at a sober living residence in Alpharetta. Roundy told him about Reis and DecisionPoint.

DiFabio was skeptical at first but soon discovered that Reis and his staff had been there.

“Instead of someone who read about addiction in a book and got a degree, they had been where I was,” DiFabio said. “They knew what it was like.”

His son is former New Orleans Saints safety ChrisReis, who became a part of football history when he recovered the onside kick during Super Bowl XLIV and propelled the Saints to victory over the Indianapolis Colts. That second-half play and the principles with which his son led his life off the field inspired Reis to make a recovery of his own.

After winning his 35-year battle against alcoholism and other addictions, he felt called to help others do the same.

In 2015, he opened DecisionPoint in a small office in Alpharetta before moving into Aqua OH-rent facility off State Bridge Road in a Johns Creek strip center. There they offer group and individual counseling sessions, three to four times a week and times in between.

“We make ourselves available to our clients 24/7 by phone, by text, and by email,” he said. “This is my way of giving back.”

Clients have access to what Reis calls The Legacy Club, a sober social environment where they can spend time with others in recovery. The club, a cross between a coffeehouse and a sports bar without the alcohol, features a pool table, big-screen TVs and comfy seating.

“They can come here and not have to feel like they’re different or weak, that there is something wrong with their character because we treat their addiction like the disease that it is,” Reis said.

That’s the difference between this epidemic and the crack epidemic that preceded it.

Some would argue race made it so. Reis believes society and law enforcement simply have a better understanding of addiction.