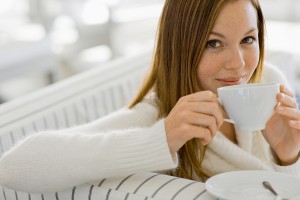 How much tea? Generally, one teaspoon of dried herbs or three tablespoons of fresh herbs, to one cup of water is a beneficial and safe amount. Most herbs should steep for 5 to 10 minutes. Our body gets used to the effects of herbs and we will build up a tolerance over time to herbs, that we use regularly. In order to benefit from herbal teas avoid using them regularly for prolonged periods of time. One to two cups per day of the following teas is all that is recommended to start with.

Valerian Root is well known for its sedative properties and is often taken to promote good sleep. Quality sleep is often a problem for those who are stressed out. Valerian can also ease tension, both physical and emotional. Be careful because too much can make you lethargic, limit it to 1-2 cups per day based on your body’s response. Also note* it should not be used by kids under 12 years of age.

Chamomile. Many people reach for chamomile tea to relax. It helps soothe the stomach and decrease mild anxiety. It is one of the herbal remedies that can be given to children, though it is not recommended for prolonged use in anyone. Chamomile could stimulate an appetite that has been suppressed due to stress.

Lemon balm. Anything with the name “balm” should be soothing, and lemon balm is no exception. Lemon balm acts on the nervous system to make you feel less nervous, anxious or upset. Generally taken in a tea, lemon balm may also reduce headaches, which could also be a symptom of chronic stress. Let it steep up to 15 minutes and use it in a hot or iced tea.

Kava is arguably the strongest herb for treating moderate to severe anxiety. Some herbal remedies ease the symptoms of anxiety, but kava studies claim that it reduces anxious thoughts. There are some concerns about the safety of kava, including liver damage, so it is always best to talk to a doctor before trying any herbs, especially if you are on any prescription medications.

Passionflower (Passiflora incarnata) was first grown and used by Native Americans in the Southern United States, like so many of our plant medicines. Passionflower has the flavone chrysin, which has wonderful anti-anxiety benefits and, in part, can work similarly to the pharmaceutical Xanax (Alprazolam).

Two studies totaling almost 200 people showed no difference between the efficacy of common anxiety medications and passionflower, but showed that the herb may cause less drowsiness.

How to Dose Passionflower. Passionflower tea can be made by infusing 1 tablespoon of dried herbs in 1 cup boiling water. Let the mixture steep for about 10 minutes. Drink the tea near bedtime to induce restful sleep. Passionflower is generally safe and has not been found to adversely interact with other sedative drugs. To be on the safe side, it should not be combined with alcoholic beverages or prescription sedatives.

Passionflower should not be used by pregnant or lactating women, or for children under 6 months old, because there have not been any studies in these groups of people.

People with moderate anxiety who want the benefits of kava without the possible risks can try passionflower tea. Passionflower might help with severe anxiety, but it is recommended for people with a mild to moderate condition. This herb is known to decrease muscle tension and calm nerves. It could also help with headaches and sleep difficulties.

Ashwagandha. An herbal medicine grown in Africa, the Mediterranean and India, ashwanganda (Withania somnifera) is an adaptogen, meaning it can adapt to the body’s current state. This class of herb helps the body fight stress by reducing the production of stress hormones that result in the fight-or-flight response. This adaptogenic quality can help the body relax and help the body stay strong. It also is a potent antioxidant as well.

This Indian herbal ashwaganda contains a chemical called ashwagandholine alkaloid which has a mild relaxant, tranquilizer like-effect on the central nervous system.

How to Dose Ashwaganda

This works best in the evening hours, mixing 1 cup of liquid (milk or water) with ½ teaspoon of herb or dried leaves. Let the mixture steep for about 15 minutes and cool. Strain and then drink. Ashwanganda is known to be quite safe in the short term of a few weeks. No long-term studies are known.

Who Should Use Ashwaganda?

Ashwanganda is best for people who are nervous and exhausted after having undergone a lot of physical and emotional stressors. It’s also excellent at bedtime for people who have insomnia.

Eleutherococcus comes from Siberia, as well as from the northern regions of Korea, Japan and China. Commonly called eleuthero, this herb is not considered a true ginseng (like Panax ginseng) because it does not belong to the same genus plant family.

Eleuthero tea contains triterpenoid saponins, which are substances that have a beneficial effect on the body when it is stressed. The University of Maryland Medical Center website notes that Siberian ginseng tea improves blood circulation and enhances mental and physical prowess, as well as regulates the amount of stress experienced. This herb may also help the immune system fight common viruses.

This hardy plant is known to survive brutal Siberian weather conditions. Many plant experts believe it can confer this strength to those of us who take it. Human studies seem to support this idea. One study of 45 men and women revealed a 40% reduction in raised heart rate during stress overall, and up to a 60% reduction in women.

Other studies showed eleuthero lowered blood pressure, and eliminated symptoms of angina. Interestingly, as a true adaptogen, it seems to help raise blood pressure in those with low blood pressure.

When Should You Take Eleutherococcus?

We tell our patients to take this herb in the morning and/or afternoon. Some sources suggest for best effect, it helps to take it for 6 to 8 weeks straight, and then have a two-week pause before restarting, to avoid building up a tolerance.

The long-term approach to anxiety and stress is to work on stress management by sleeping at least 7 hours per night, eating healthy whole foods and exercising regularly. Herbal tea remedies can help but they will not work if the lifestyle as a whole is not being worked on. The process of brewing tea, and sipping on it out of your favorite mug cuddled on the couch is additional stress relief, in addition to the actual scientific research.

Listed below are several herbs that can be combined together to make a Depression Tea Cocktail.” Directions: Combine the 6 herbs listed below, add 1 teaspoon of the mixture to one cup of water, bring to a light boil, let sit for 5-10 minutes.

The following 3 Teas can be used separately to fight depression.

Seeing how green tea also contains caffeine it may seem like it would not help with depression, but it has one other extremely important ingredient: L-theanine. L-theanine works synergistically with caffeine to boost mood in such a way that you don’t get the same crash-effect. It has its psychoactive properties because it is able to cross the blood-brain barrier, and has been shown to reduce stress, as well as boost dopamine and the brain inhibitory transmitter GABA

St John’s Wort: is a yellow flowering plant and centuries-old remedy for mental disorders and nerve pain. Various forms of the plant also have been used as a sedative, a malaria treatment and a balm for burns, wounds and bug bites. The flowering tops of the plant are used to prepare herbal teas, capsules and tablets for depression and related disorders. The National Center for Complementary and Alternative Medicine reports that St. John’s Wort can be used for short-term treatment of mild to moderate depression, although conflicting evidence exists regarding the efficacy of the herb for more severe depression. Talk to your doctor before using St. John’s Wort herbal tea for depression

Many people reach for chamomile tea to relax. It helps soothe the stomach and decrease mild anxiety and depression. It is one of the herbal remedies that can be given to children, though it is not recommended for prolonged use in anyone. Chamomile could stimulate an appetite that has been suppressed due to stress and/or depression.

Drinking tea can be a comforting experience, especially before bed in your PJ’s with your favorite blanket and mug cuddled up on the couch. It may have some placebo effect but there is actual science and research that proves herbal teas can help reduce depression in addition to lifestyle behavior modifications.