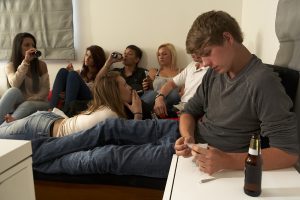 Substance abuse and relapse into substance abuse and addiction has become more prevalent in the younger age teen school aged children. There are several theories of why addiction is more common in younger age groups, some believe kids are exposed to addiction and the behaviors that go along with it due to social media, they have an increased stress level due to an overbooked schedule with high expectations, and/or they are trying to fill an emotional void at which their addictive tendencies take over. Nutrition is very important to maintain healthy nutrient balance, ability to focus, and maintain an ideal weight, which are all key factors in a teen’s health and mental health. We will go over the nutritional science behind addictive behaviors, along with guidelines and strategies to a healthy diet.

A teen with substance abuse is more likely to relapse or increase addiction tendencies if already present when they are malnourished. Some research suggests drug and alcohol addiction causes a person to forget what it is like to be hungry and they may crave the addicted substance instead of true hunger. The person should be encouraged therapeutically to think that they may be hungry, when cravings become strong.

During recovery from substance use, dehydration is also common. It is important to get enough fluids during and in between meals. In some cases if weight gain has occurred, eating foods that are nutrient dense, not calorically dense, is a strategy that can be used to avoid further weight gain, promote weight loss and most importantly prevent health related issues to increased levels of adipose tissue (body fat). By following these guidelines through the recovery process it will have a small but statistically significant effect on helping a patient’s withdrawal from addiction, while reducing symptoms of their addiction. Go to www.namedprogram.com for a free week of healthy menus and recipes.

Another important area in the use of nutrition in recovery and relapse prevention is the addition of appropriate amino acids that serve as the building blocks for powerful chemicals in the brain called neurotransmitters. These neurotransmitters, including epinephrine and nor-epinephrine, GABA, serotonin and dopamine, are closely tied to addiction behavior. With the use of various amino acids, brain chemistry can be changed to help normalize and restore deficiencies in the neurotransmitters that spur cravings that can lead to addiction and relapse. Amino Acid injections are the most potent and effective, and optimal to use during recovery. Oral supplementation is good for long-term use after neurotransmitters have initially been changed. This is also known to suppress the opiate receptors, which greatly aids in recovery.

Also, avoid chemically based non-calorie sugar substitutes (except pure stevia), these include, saccharin, aspartame, and sucralose. Non-calories sugar substitutes are typically found in drinks, and diet marketed foods like yogurts, nutrition bars, frozen meals and desserts. Although these sweeteners are not full of calories, our brain still recognizes that there is something sweet inside of our body and it instinctively sends a signal to the pancreas to secrete insulin.

Gluten has become a common intolerance both mild and more severe with those who suffer from Celiac Disease. Experts believe that the low nutrient over processed broken down wheat in our mainstream cooking flour has caused us to become intolerant to gluten, resulting from compromised gut function. The gut and gastrointestinal system is the body’s dashboard for good health, containing healthy bacteria that help keep unhealthy bacteria levels at bay.

In reference to addiction, research has also revealed that gluten like sugar has a similar increased opiate receptor activity. The brain tissue in mice revealed an increase in opiate response, specifically when gluten was consumed.

Caffeine and Coffee with opiate response

Consuming coffee has been shown to cause opiate receptor binding . This further explains why most people who drink coffee drink it daily and if they consume more than 24 ounces daily, they would have withdrawal symptoms if they stopped. Excessive consumption of coffee and caffeine can cause anxiety, autoimmune pain disorders, inflammation, and sleep disturbances. Eliminating coffee and other caffeinated substances from the diet will help reduce the opiate response.

Consuming a diet rich in nutrient dense palatable foods is the key to offsetting the negative effects of opiate receptors. It is common among anyone who is trying to eat healthy, that the food at first will taste and appear bland due to the reduction in sodium, fat, and sugar and in most cases calories. Using fresh herbs, spices, fruits, vegetables and healthy fats will improve the overall enjoyment of the foods, leaving one feeling rewarded and satisfied, not craving anything else. Suppressing the opiate response is a valuable key to successfully beating the addiction and maintaining this will drastically lower the relapse rate.