Dr. Guy Crosby a professor of nutrition at the Harvard school of public health has concluded that canola oil is generally considered healthy because it is low in saturated fat and it contains antioxidant components, phytosterols that help reduce* the absorption of cholesterol in the body. He also states that it contains a significant amount and is a good source of heart-healthy polyunsaturated fats (9-11%).

He does express concern with the safety of canola due to the processing it undergoes. He compares it to other processed foods that contain harmful trans fatty acids that pose numerous health concerns. He advises that cold-pressed canola oil exists but it is very expensive and hard to find yet this is the best option.

The Impact of Canola Oil on Health

Canola oil is often referred to as a healthy choice for oils because it is low in saturated fat. It is also appealing to a lot of people because it is less expensive than other healthier vegetable oil options. Recent research is showing that this common oil can actually have a negative influence on memory loss, specifically in reference to Alzheimer’s disease. 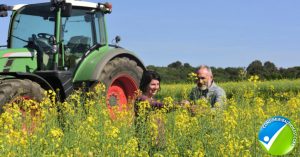