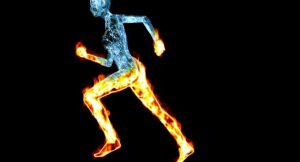 Many coaches and athletes routinely perceive lactic acid, or more specifically lactate, as a dead end waste product that is completely unfavorable to all athletic performance. This assumption however, may no longer be considered accurate – so much so that it has been labelled the mythology of lactic acid (1).

While Sports Scientists are largely in agreement that lactate behaves more like an athlete’s friend than foe, recent research has now begun to question one of the basic tenets of muscular fatigue increased acidity or lactic acidosis.

This article explores some of Aqua OH-rent understanding about how lactate and lactic acid functions in the human body, particularly during exercise. It examines the compounds roles in fatigue and energy metabolism and as a limiting factor in performance.

Recall that the end product of glycolysis is pyruvic acid. Traditionally, it was believed that oxygen availability, or lack thereof, lead to the conversion of pyruvic acid into lactic acid and accompanying increases in muscle and blood lactate.

Over the past 35 years, evidence has mounted against this idea (3,4,25). The best evidence seems to suggest that oxygen availability is only one of several factors that cause an increase in muscle and blood lactate during submaximal exercise. In fact, lactic acid can be formed anytime glycolysis takes place regardless of the presence or absence of oxygen and is even produced at rest (2).

Historically, the lactate threshold has often been referred to as the point at which energy is generated through predominantly anaerobic metabolism. Yet the onset of blood lactate accumulation (OBLA) only represents the balance between lactate production and removal and suggests nothing about the aerobic or anaerobic metabolism per se (8).

Researchers have been unable to show a lack of oxygen in the muscles at an exercise intensity above the lactate threshold (8). Instead OBLA may be caused by many different factors other than those associated with anoxia or dysoxia.

For a more detailed discussion of other factors leading to the increased production of lactic acid and blood lactate, see Gladdens 2003 paper Lactate metabolism during exercise (5).

Lactate is Not a Waste Product

Before the 1970s lactic acid was considered a waste by-product resulting from a lack of available oxygen to the working muscles. It was blamed for the burning sensation during vigorous exercise, and central to the process of fatigue. The general consensus was, and still is amongst many coaches and athletes, that lactic acid is responsible for fatigue and exhaustion in all types of exercise.

On the contrary, lactic acid only accumulates within muscle during relatively short, highly intense exercise such as sprint swimming or running. Endurance athletes, such as marathon runners for example can have near-resting lactic acid levels following a race despite being exhausted (2).

Far from being a waste product, the formation of lactate allows the metabolism of carbohydrates to continue through glycolysis (2). Keep in mind that glycolysis allows rapid production of energy required to sustain intense exercise.

The heart, brain and most slow twitch fibers are very apt at clearing lactate from the blood to the extent that they prefer lactate as a source of fuel (27,28,29). Note however, that lactate must first be converted into pyruvate before it can be used as a source of energy.

Clearance of lactate from the blood can occur either through oxidation within the muscle fiber in which it was produced or it can be transported to other muscles fibers for oxidation (31,30). Lactate that is not oxidized in this way diffuses from the exercising muscle into the capillaries and it is transported via the blood to the liver (31). Through a process known as the Cori cycle, lactate can be converted to pyruvate in the presence of oxygen, which can then be converted into glucose (2). This glucose can either be metabolized by working muscles or stored in the muscles as glycogen for later use (2).

So lactate should be viewed as a useful form of potential energy that is oxidized during moderate-low intensity exercise, during recovery and at rest (28,30). Unlike lactic acid, lactate is not thought to be fatigue-producing (31).

Based on this more sympathetic view of lactate, sports nutrition companies have introduced sodium lactate into sports drinks and there is some tentative support that these may have an ergogenic effect (9,18).

What the lactate shuttle model essentially shows is that lactate is a crucial intermediary in numerous cellular, localized and whole body metabolic processes, and may help to prolong submaximal activity, rather than hinder it.

During intense exercise, muscle and blood lactate can rise to very high levels (10). This accumulation above resting levels represents the balance of production and removal. It says nothing about whether accumulation is due to an increased rate of production or decreased rate of removal, or both. Similarly, if lactate concentrations in the blood do not rise above resting levels during or immediately following exercise, it also infers nothing about lactate or lactic acid production during that activity. It may be that lactic acid production is several times higher than at rest but that it is matched by its removal showing no net increase (26).

A common misinterpretation is that blood lactate or even lactic acid, has a direct detrimental effect on muscle performance. However, most researchers agree that any negative effect on performance associated with blood lactate accumulation is due to an increase in hydrogen ions. When lactic acid dissociates it forms lactate and hydrogen ions – which leads to an increase in acidity. So it is not accurate to blame either lactate or lactic acid for having a direct negative impact on muscular performance.

The increase in hydrogen ions and subsequent acidity of the internal environment is called acidosis. It is thought to have an unfavorable effect on muscle contraction (10) and there has been considerable research to demonstrate that this is the case (11,12,13,14,15,16,17).

However, accumulation is the key term here as an increased production of hydrogen ions (due to an increase production of lactic acid) will have no detrimental effect if clearance is just as fast. In fact Robergs et al. (19) takes it a step further

They suggest that lactate production (especially if accompanied by a high capacity for lactate removal) may be more likely to delay the onset of acidosis (19, 25). The reasons for this, amongst others, are that lactate serves to consume hydrogen ions and allows the transport of hydrogen ions from the cell. Similarly, they maintain, there is a wealth of research evidence to show that acidosis is caused by reactions other than lactate production (19).

Rogers et al. do conclude however, that increased lactate concentration, although not causative, coincides with cellular acidosis and remains a good indirect marker for the onset of fatigue.

As mentioned earlier, there has been substantial research to show that an increase concentration of hydrogen ions and a decrease in pH (increase in acidity) within muscle or plasma, causes fatigue. Additionally, induced acidosis can impair muscle contractility even in non-fatigued humans and several mechanisms to explain such effects have been provided.

Yet in the last 10 years a number of high profile papers have challenged even this most basic assumption of fatigue. A 2006 review of these by Cairns (18) suggests that experiments on isolated muscle show that acidosis has little detrimental effect or may even improve muscle performance during high-intensity exercise.

In place of acidosis it may be inorganic phosphate that is major cause of muscle fatigue (20). Recall that an inorganic phosphate is produced during the breakdown of ATP to ADP. However, there are several limitations regarding this phosphate hypothesis (21). Another proposal for a major contributor to fatigue, rather than acidosis, is the accumulation of potassium ions in muscle interstitium (22,23,24).

Contrary to this new research (which is by no means definitive) is the argument that if acidosis plays no role in fatigue then it is surprising that alkalosis (through sodium bicarbonate consumption for example) can improve exercise performance in events lasting 1-10 minutes. To reconcile this, Cairns (18) hypothesizes that while acidosis has little detrimental effect or may even improve muscle performance in isolated muscle, severe blood plasma acidosis may impair performance by causing a reduced central nervous system drive to muscle.

At rest the normal range for blood lactate is 0.5 2.2 mmol per litre (32,33). It is thought that complete exhaustion occurs somewhere in the range of 20 25 mmol/L for most individuals (34) although values greater than 30 mmol/L have been recorded (35).

Blood lactate concentrations peak about 5 minutes after the cessation of intense exercise (assuming cessation is due to exhaustion from acidosis) (32). The delay is attributed to the time required to buffer and transport lactic acid from the tissue to the blood (36). A return to pre-exercise levels of blood lactate usually occurs within an hour and light activity during the post-exercise period has been shown to accelerate this clearance (32,35,37). Training can also increase the rate of lactate clearance in both aerobically and anaerobically trained athletes compared to untrained individuals (32,38,39).

Interestingly, Stone et al (40) noted that trained individuals generated higher levels of blood lactate at the point of failure compared to untrained subjects when exercising intensely (squats). The time and amount of work they completed, unsurprisingly, was greater in the trained group. This seems to suggest that training may induce greater tolerance to lactate accumulation and it may also add weight to the argument that lactate serves to delay acidosis and fatigue. At any absolute workload (i.e. when both groups were lifting the same weight) the trained group had lower levels of blood lactate.

The anaerobic or lactate threshold is based on the point at which blood lactate abruptly accumulates. It can be used as a prediction for race performance and to prescribe training intensity.

This is clearly an area that is far from resolved but what seems clear is that lactate can no longer be labelled definitively as the athlete’s enemy. On the contrary, gathering evidence suggests that many aspects of lactate production are beneficial to athletic performance.